The NCAA Needs a Geographer

If you’ve been watching March Madness, then you may have noticed that there is something absolutely mad about the tournament. They section the tournament into four regions: West, East, South and Midwest. As geographers, we encourage this strategy. But how they come up with which school plays in which section of the bracket is confusing, but once you layer on the cities that the games are played in, it all gets just a little bit crazy. Maybe this is the madness that they were referring to.

For example, the University of Arkansas, out of Fayetteville Arkansas, was placed in the “West” section, while we could see them in either the South or Midwest section, but they played their first two games in Buffalo, New York, which doesn’t seem to us like a western city. The games in the South section of the bracket were played in San Diego, Pittsburgh and Indianapolis.  Geographic confusion reigns supreme here.

Just for fun, we found the center coordinates for the schools of each section, and of course, we mapped it. The West is actually the furthest west, but after that, things fall apart. The Midwest bracket is the furthest south, the East bracket is west of the South bracket, which is the furthest east by some margin. The map below shows the confusion: 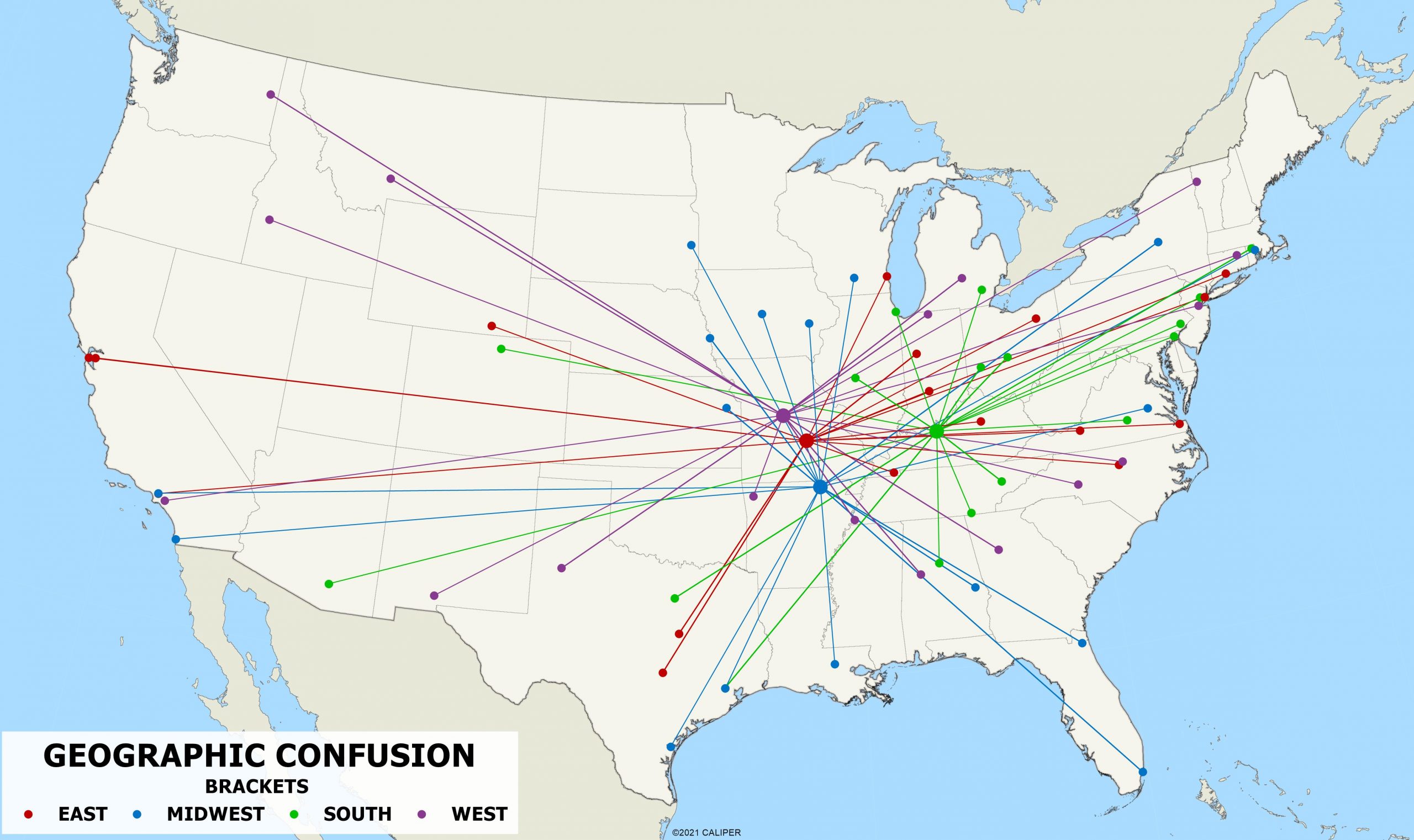 For this year, if we placed the games in the town nearest the centroid of each bracket, it would come out as the following:

We decided to help by optimizing somewhat using a minimum distance criteria, and, believe it or not, the natural grouping is in fact East, South, Midwest, and West. Full points there, but our tournament locations would be:

While this is our idea, it may not be the most desirable for the NCAA. They tend to choose large cities to host the games, for obvious tourist reasons and even perhaps the availability of a suitable arena. Even if they don’t like our simplistic ideas, it is crystal clear that they need some serious help here. So as a public service we went ahead and wrote the start of a job posting for them, in case they ever figure out that they should hire a geographer.

The NCAA seeks a geographer to assist with March Madness Bracket creation. Responsibilities include assisting the selection committee with placing teams in appropriate brackets and choosing geographically appropriate host cities for the games to be played in. Basic understanding of United States geography required, as well as knowledge of how to use a compass. Pay is minimal, but the work is seasonal. Requires 3-5 years of experience in map creation, travel time analysis, tourism, or similar industries.