Watching the Hurricane Ida coverage a few weeks ago had us thinking about odd geography in the United States. What is a Parish? Why can’t they just say county? Much of our geography today was shaped by those who settled there. Earliest settlements were by three different European cultures, which took the best of what they had and mirrored it in the new world.

The settlers from England, as we know, landed in what we now call New England, the first colonies in the United States. Early settlement patterns were based on distance, with villages centered upon the local church. This developed into the New England “township” concept, where a central village is at the center of an often primarily rural township. Counties emerged as a means of organizing townships. In the southern colonies, located from Chesapeake Bay south, are based on the plantation system, where land grants were offered to a small number of people, usually minor figures in the royal hierarchy. Villages naturally grew around the plantation homestead, linked by roads which linked the plantations following existing native trails or natural features. In the Mid-Atlantic region, we see a mix of the two, with some religious outposts like they have in New England, and some areas with large land grants. Counties today basically follow the original land grant boundaries.

When the French came to the United States, they controlled most of the Mississippi basin in addition to New France, which included Quebec and coastal New Brunswick. Water transportation was key, so land grants were long narrow strips running along both sides of most major waterways. These grants were common in Louisiana along the Mississippi and its tributaries, in Canada along the St. Lawrence, Saguenay River, and along the coast of the coastlines of Gaspe and New Brunswick. While the English saw their colonies flourish, this probably hampered the growth of the French colonies, because farming these long narrow strips was less profitable than compact areas, which hampered the development of villages. The Parish system in Louisiana grew out of the locations of Catholic churches. The function of the parish is very much like the county in other states, but the name is retained from the original French settlement period. The map below shows current census blocks in Louisiana, and you can clearly see from the map the long, narrow strips from the original land grants still very much a part of their geographic landscape. 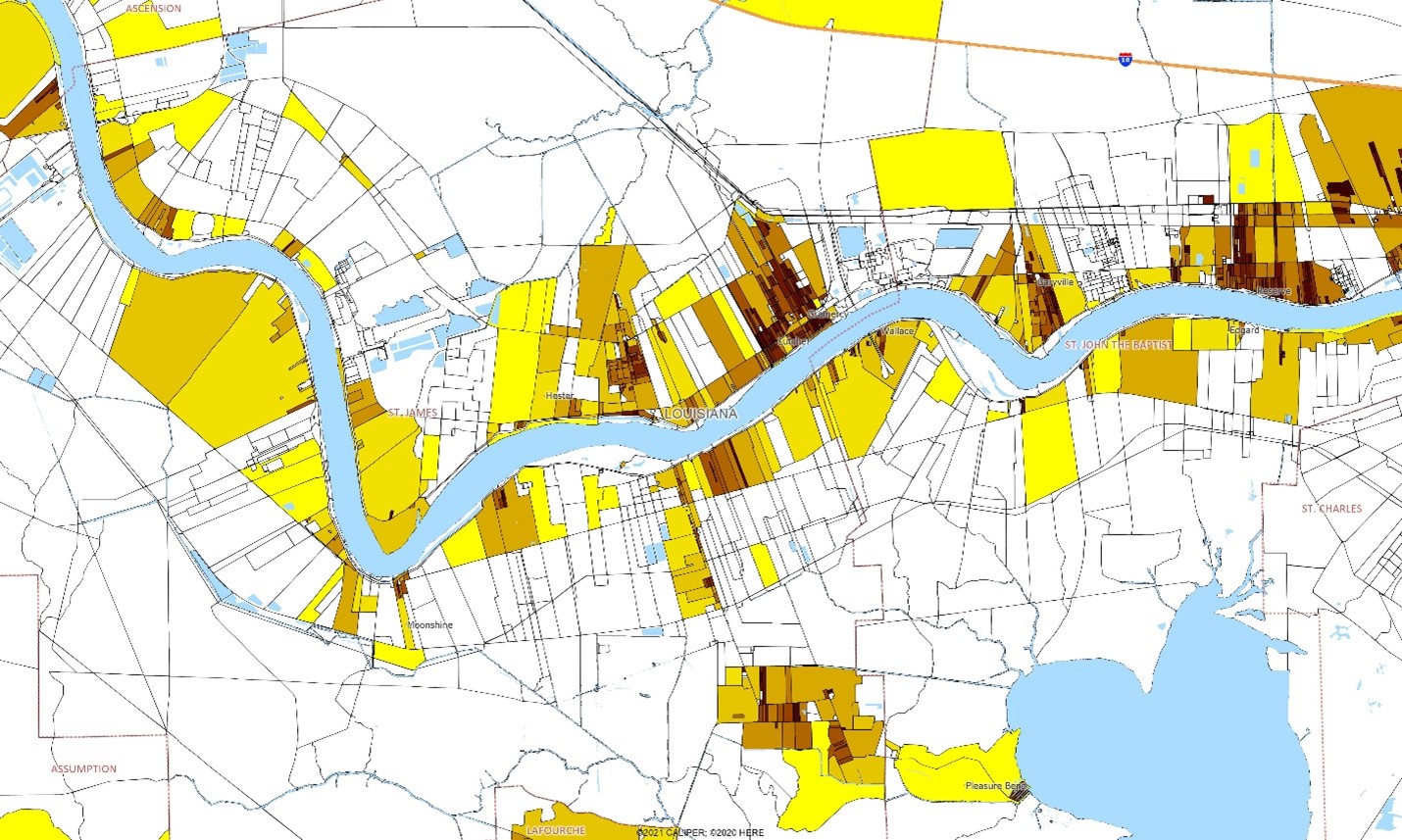 On the west coast, the Spanish settlers imparted their geographical views, especially on California. This began not with colonizers, but with a set of connected missions running from San Diego to San Francisco, regularly spaced a day’s journey apart. Villages grew up around the missions, and land grants were given, often to retired military leaders. The patterns of settlement relied upon the mission road – which ultimately became US 101, El Camino Real. Unlike California, in Texas they tended to be clustered along the Rio Grande near El Paso, along the Rio Grande in South Texas, and in central Texas from Corpus Christi north through San Antonio, Austin and a third line of missions near Nacogdoches in east Texas.

As the United States filled in the middle, unlike the early settlement, there was a much more deliberate attempt to control the land. The British switched to a survey-based system, where townships were laid out in regular patterns without regard for topographic features. Michigan and Ontario are great examples of this – with townships laid out in regular patterns over an often irregular landscape.

West of the Mississippi, in the plains, land was granted in ¼ mile sections with no regard for anything but the survey lines. The map below of west Kansas shows this sectioning, with the main road following not the land grant pattern, but the river, likely an existing trail. When compared to the map of Louisiana, this change in U.S. landscape becomes very apparent. 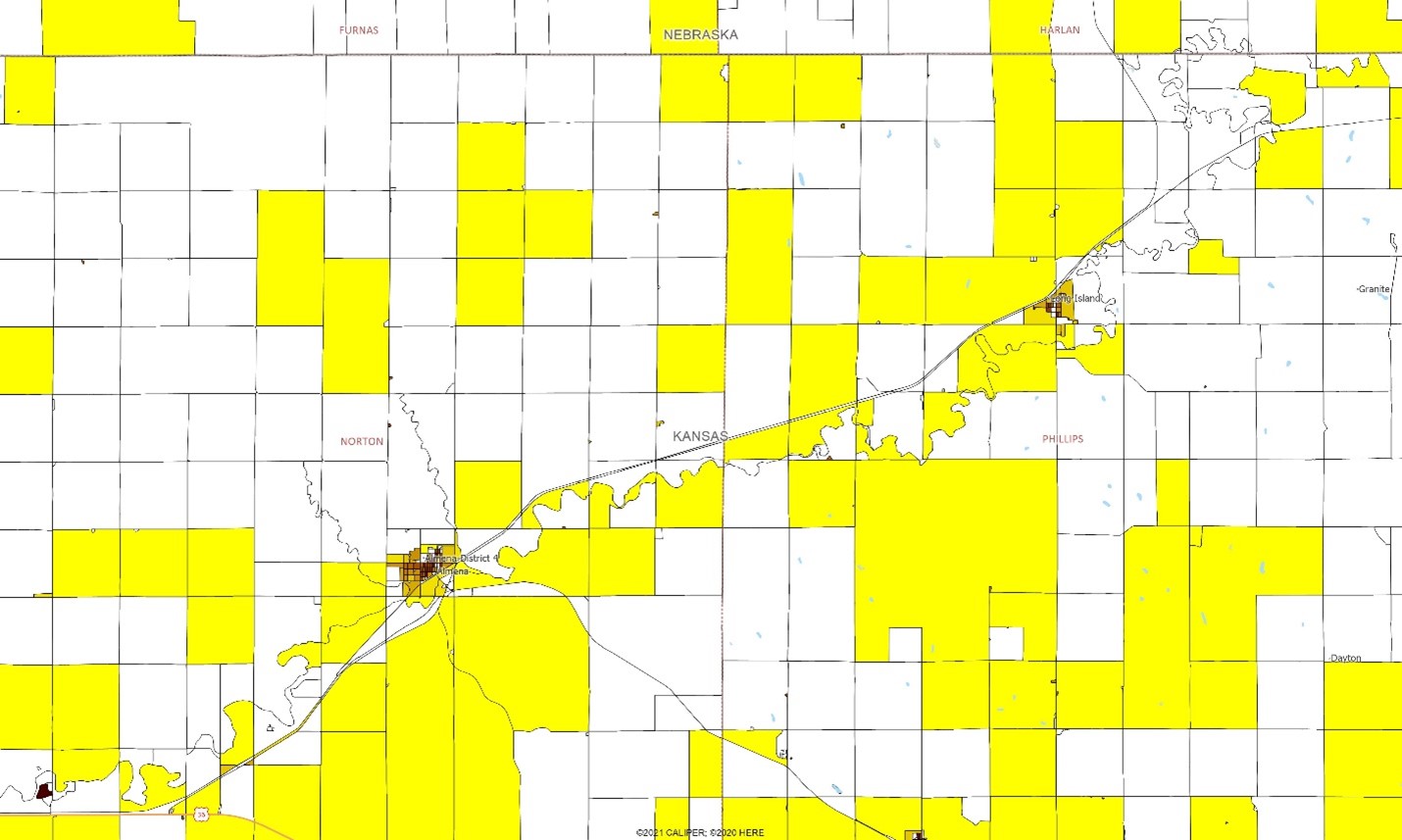 When they did the surveys to make the ¼ mile sections, the system was usually built around key east-west and north-south lines, and filled in by surveyors between them. Ever driven down a country highway that jogs half a mile over? These are the remnants of survey errors, and the map of central Michigan below shows them clearly. 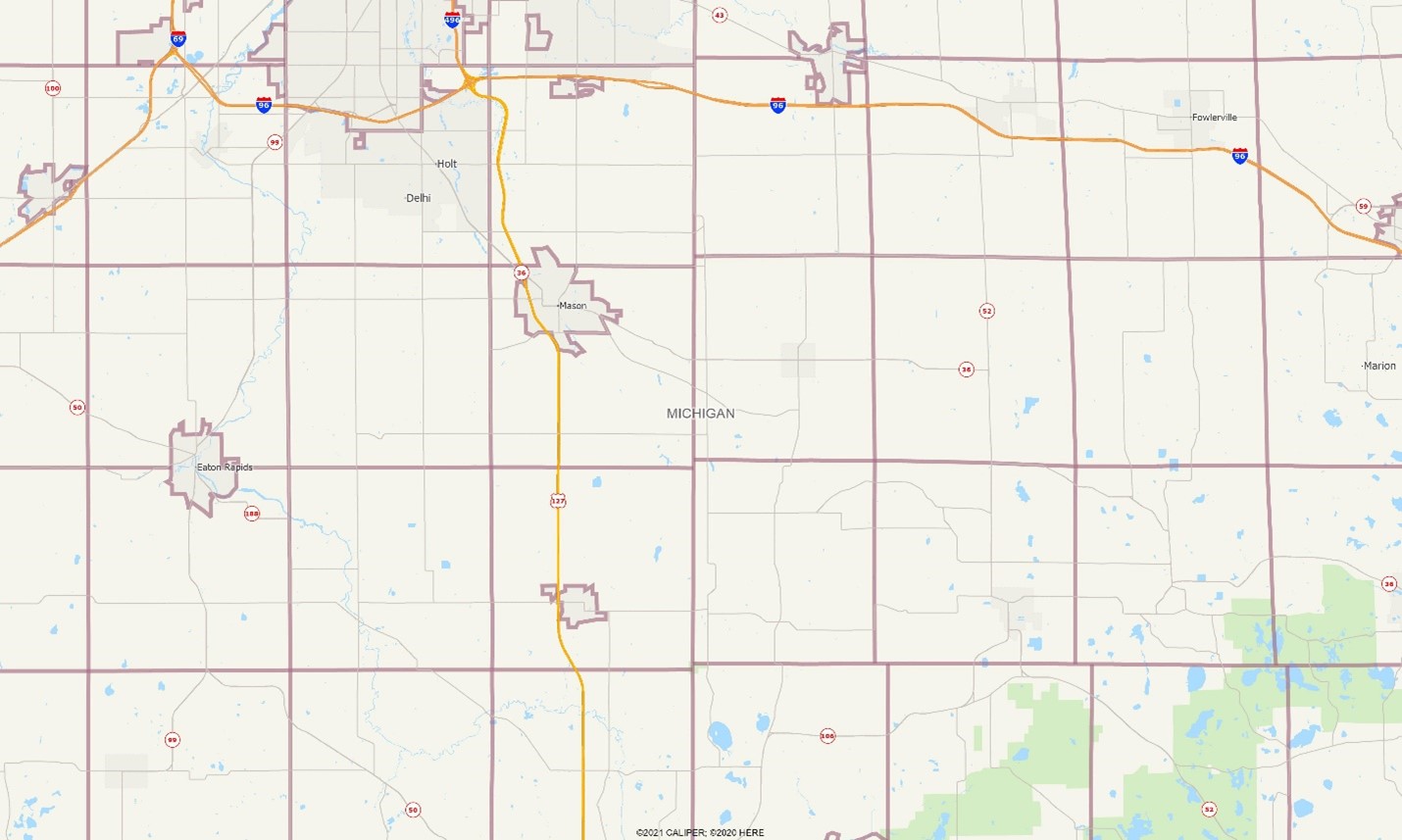