Reaching and Acquiring Customers in Your Market

Over the last two decades, many shoppers have abandoned traditional brick and mortar retail for the ease of internet ordering. While the internet might seem to have removed geography from the equation, this is simply not the case. More than ever, a retailer or manufacturer must have a marketing strategy which reaches its customers whether they visit a store or click a button. In either case, we can use the data available from mobile sources, credit card records, or even just the local trade area definitions to most effectively reach customers through advertising.

Using Panorama segmentation to identify age, income, education status, etc. and a range of media related questions from the MRI-Simmons surveys, we can identify the relative effectiveness of different media channels at reaching customers based on where they live, including those who shop via internet.

Within the St. Louis area, we mapped the most and least effective communications channels to reach customers. To a retailer with multiple locations in the city, it might make sense to market to customers of each location using different media. Newspapers in one trade area, magazines in others, and texts in others. 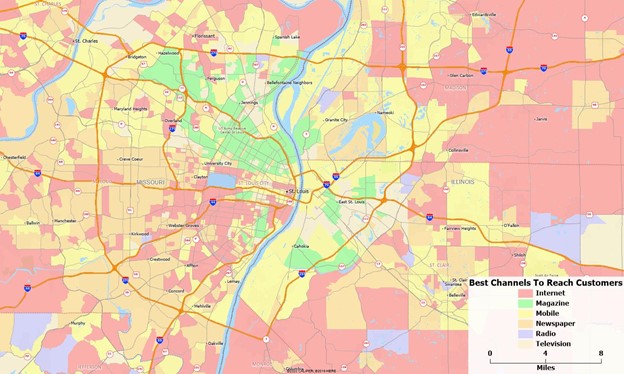 In some cities, it is also important to differentiate between Spanish and English media – both radio and television. While multiple media channels may be suitable in most areas of the city, there are areas of most cities where traditional media – newspapers especially – are simply not effective. The map below shows the least effective channel by neighborhood. 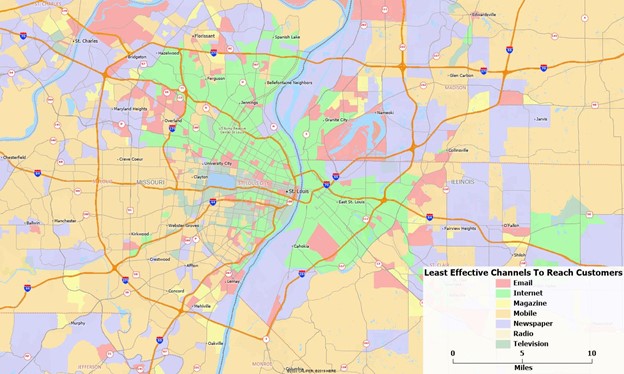 In this increasingly complex world seemingly without the ‘friction of distance’, customer demographics remain critical to success. Segmentation tools like Panorama, when combined with the rich content of the MRI-Simmons surveys, can provide valuable insights that increase advertising effectiveness and maximize sales from both retail and internet sources.