Boston has a long history, first settled in 1630 by Puritan colonists. The city quickly became the center of New England and the center of the American Revolution. Today, Boston is the 24th largest city in the U.S., home to 685,146 people. When you look at the larger metropolitan area of Boston, Cambridge and Newton, the Boston metro area is the 10th largest metro area in the country. This dense city, with a sprawling suburban area, seems to be experiencing slow growth, especially since the 1980’s. What are the demographics that make Boston unique?

Since 1970, Boston’s population has grown by 7%, though there was a sharp decline in 1970 with a rebound in 1980. While the city center has seen growth, the closest surrounding suburbs have seen areas of decline. Once you move farther out, areas like Hopkinton, Marlborough and Littleton have seen rapid growth. The map below shows this population change since the 1970 census. 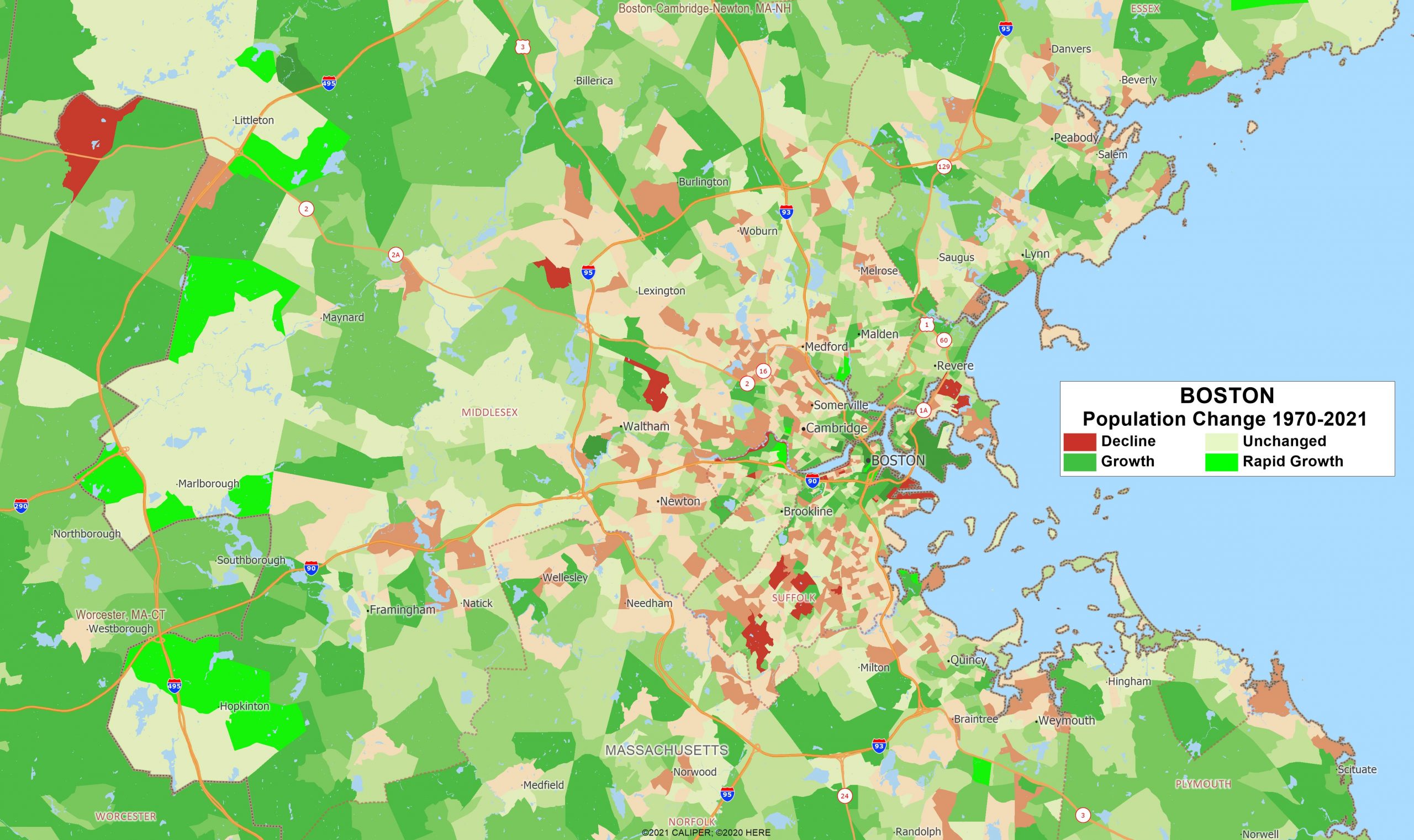 When you think about Boston, you might think about the many universities based in the Boston area. Boston College, Boston University, MIT and Harvard are just a few of the many colleges and universities that call Boston home. This means that a larger percentage of the residents are college students, and 2% of their population lives in college dorms. Boston, as a result, is also home to a fairly well-educated population. Nearly 27% of all adults have a bachelor’s degree.

Boston is not overly diverse, especially when compared to other major metropolitan areas. Of the top 20 metro areas, only Minneapolis-Saint Paul is less diverse. In the metro area, only 8.7% of the population is black, while 10.21% are Asian. An interesting statistic for Boston is that there is a surprising amount of non-English speaking, bilingual and linguistically isolated households relative to the lack of diversity.

Mostly home to married couples without children (42%), married couples with children make up 32% of the population. Boston is an expensive place to live, though wages are higher as well. Average rent prices are $1,423 a month, and the average home has a value of about $483,000. These homes are often older, which in context with when Boston was settled, isn’t surprising. The median age of houses in the Boston area is 47.5 years old, and 30% of the housing is more than 80 years old. Median income in Boston is $95,163, which helps make the high housing costs more affordable.

Boston is a unique, historic city with deep roots. Will they continue to see slow growth, or will a high cost of living drive people away?