During the last few months of 2020, unemployment rates were declining most everywhere and trending towards the record low levels from just before the pandemic. Since unchanging weekly data is neither interesting to model nor interesting to use, we decided to switch to a monthly model  to release our free unemployment data for 2021.

January has been interesting, leading us to question our choices.

In Kansas, new weekly unemployment claims doubled to 66,600 in January, with January 23 claims of 82,944 – over 10% of the national total – and second only to Illinois. They were even higher than – not kidding here people – California. 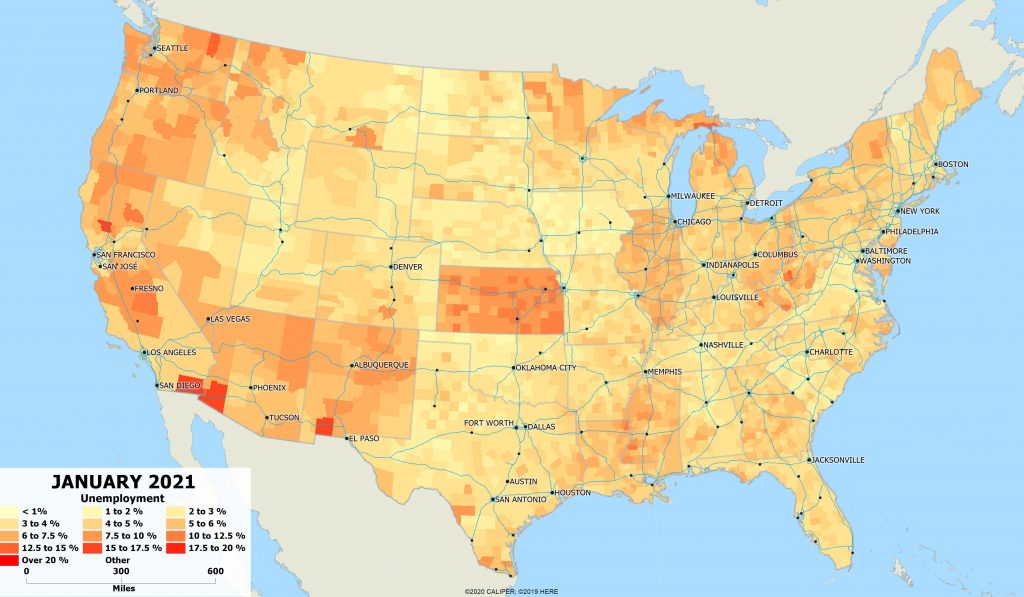 Being residents of the great state of California, we are particularly suspicious about the 75% drop in new unemployment claims between late December and late January, especially given the lockdowns ordered by the governor and ongoing issues within the California EDD, who are estimating that one in six unemployment claims processed last year were fraudulent.

One of the areas we wanted to address during this switch between weekly and monthly unemployment estimates was the significant divergence between the two sources – the weekly unemployment claims and continued claims data and the monthly Current Population Survey (CPS) which also measures unemployment levels – especially during the critical first weeks of the shutdown.

Each of the states has different rules in place for handling unemployment claims, or for that matter, defining what constitutes claimable unemployment.  And in many of those states, the rules have been changed several times during the pandemic. What seems like a simple concept, counting how many people applied for unemployment benefits this week, turns out to be more flexible than you would think.

Indeed, even the concept of unemployment is not that simple. The new claims for unemployment insurance count only those who are “insured employed” (see your state for the particular meaning of that) but at least we know that someone has declared themselves as newly unemployed and wants to collect their insurance money.

Compounding the issue during the hectic period of the spring was the fact that even within the unemployment insurance environment, the mathematics simply did not work. Continuing unemployment claims bounced up and down by amounts far exceeding the new claims in any week in the hardest hit states. In some states, the electronic application systems simply seized up and did not restart for several weeks, while in others, claims increased every week, but the number of continuing claims inexplicably declined. It should not surprise us in retrospect that if the systems which do the counting fail, the counts are probably not exactly accurate.

The CPS instead does a sample survey and asks about respondent’s employment as of the 15th of the month in question. Unemployment is the state of not having a job, but actively looking for one. If you aren’t looking, you are classified as having left the labor force. During the early months of the pandemic, it was more than possible to be collecting unemployment insurance benefits but be classified as not in the labor force at the same time. While we generally like the monthly CPS numbers, and have relied upon them for two decades now, the shuffling of people newly unemployed because of the pandemic into the “not in the labor force” category resulted in these numbers grossly underestimating the extent of the unemployment problem. Indeed, as things stabilized, the “labor force population” began to itself rebound – and the two datasets began to converge by summertime.

These sorts of weaknesses are not obvious during normal periods when we would not find the concept of a weekly model even remotely interesting but became pivotal in the early weeks of the crisis: some of the state data was simply unreliable for two months.

The result is, and remains, that it is not easy to mathematically reconcile the weekly numbers from the monthly survey results. When no one cares, they differ little. When everyone does, they are not usable in the same model. This means that a choice must be made, and, despite our preference for the monthly survey, we concluded that we must continue with a model that uses the weekly claims as the “primary” source and relegates the monthly numbers to the role of “adjustment factors”. So, we won’t be matching the monthly CPS state unemployment figures but will continue to favor the weekly numbers going forward.

Our plan for 2021 is to release the data monthly but include weekly estimates at each geographic level. The weekly maps will be replaced by a monthly series. We will also introduce files which only have the mid-month estimates for last year and going forward. These times call for flexibility, and we will be prepared at any point to modify our approach as the circumstances change. As always, you can download the files by signing up for the data here.

As always, we appreciate your feedback, suggestions, and comments on this data series.