With more than 5 decades combined experience, our data science team is the brains behind all that we do at AGS. 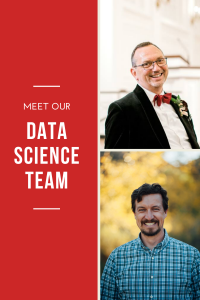 As a young boy, Gary had a love for maps of all kinds, and it was understood even by early high school that he was going to be a professor of geography. As an undergraduate at York University in Toronto, the cartography professor kindly informed him that he quite sadly lacked the manual skills to be a cartographer. Initially crushed, he latched onto the newly emerging field of “computer cartography”, which only later became known as GIS. As a graduate student at the University of Toronto, he discovered that combining economic geography with statistics and GIS programming were not only interesting, but actually in demand in “the real world”.

Armed with this discovery, the tenure stream appointment at Queen’s University was happily abandoned in order to build demographic data and site location models for Compusearch. In 1988 he set out on his first adventure as an entrepreneur, starting a GIS consulting company while continuing to build databases for Compusearch. For several years, Landmark Geographic was the sole distributor of Atlas GIS in Canada. By 1992, the opportunity arose to join Urban Decision Systems in Los Angeles, where he re-engineered the software and production system and greatly expanded the data offerings of the company. With UDS nearly doubling in sales over the next few years and proving itself an annoyance to its primary competitors, the company was acquired by Claritas and promptly dismantled.

Gary is excited about a number of AGS initiatives including some new methods for analyzing trade areas and site location modeling, many of which will be introduced in this newsletter in the coming weeks.

Matt Needham has been messing around in the world of Demographics and Spatial Data for over two decades! A few years after graduating from UCLA with a Bachelor of Science in Cognitive Science with an Emphasis in Business and a Specialization in Computing, Matt found stimulating work at Scan/US Inc. There he worked over eleven years on the development of desktop mapping software and demographic databases. He was instrumental in the creation of ZIP code boundary polygon sets, a nationwide geocoder and a drivetime contour engine.

In 2010 he joined the crew at AGS, overseeing the production and distribution of business intelligence data and applications to resellers and customers. An experienced computer programmer with a thirst for new challenges, Matt is helping AGS branch out from the desktop world to bring data to the web. In June he’ll celebrate 10 years with the company! As an avowed data nerd, he’s super excited about the upcoming Census.

His other interests range from bookish (reading novels, studying AI, pondering the Fermi paradox) to indulgent (enjoying travel and gourmet meals) to masochistic (jogging). He lives in Santa Clarita, CA with his amazing wife Alison and three kids.